The Most Common Kinds Of Lures 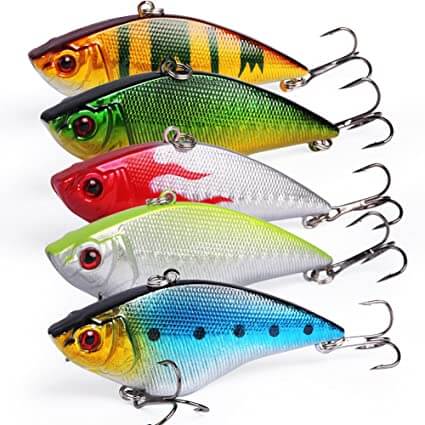 For many fishermen out there, there’s nothing quite as efficient as using live bait, whether this comes in the form of worms or insects. Live bait works extremely well for most kinds of fish, simply because it will move around on its own and attract a potential catch without the fisherman having to do much.

Live bait, however, can be something of a pain to get a hold of as not every fisherman out there has a worm farm at their disposal, nor does every fisherman have a garden available to dig in as their whim.

The next best option, then, are lures, and many swear that they work just as well as live bait, if not better. There are many different kinds of lures available on the market, but these are the most common.

These kinds of lures are made out of oval shaped blades that spin, which themselves consist of very thin metal that has little resistance to the water around it. The metal, when in the water, will spin like a propeller as it moves forward, creating the movement that will potentially attract a fish. Most spinnerbait lures will also have a coating of reflective material that will make it catch the light as it moves, which gives it the appearance of a smaller bait fish, such as a minnow.

These are great lures for those that are wanting to catch pike and bass, or any predator species that like to hunt smaller fish. These also come in several varieties, depending on what the fisherman is after.

These are among the oldest lures around, having been around for decades, but also being some of the most reliable. These consist of an elongated piece of metal that has a treble hook located on one side, and a loop or grommet on the other side.

These also come with patterns involving a series of different colours, making them shiny and reflective, with many of them being reflective on both sides. The oblong shape of the spoon will make it wobble as it goes through the water,

Crankbait is popular among fisherman for its uncanny ability to imitate smaller bait fish. This kind of lure comes in a wide range of different shapes, sizes, and colours, and is made up of two treble hooks on the front, which are usually bill shaped – but this can very much depend on the design.

A crankbait is especially effective at capturing bass, so it’s a good lure to have for those fisherman that find themselves out at freshwater dams more often than not, and who like to sit back and enjoy fun games on their phones while the lure does the work.

These is a type of lure that’s design for jigging, which is another effective method of catching bass and other freshwater fish.

The jig acts in a way that’s erratic, moving vertically through the water, mimicking the kind of prey that large freshwater fish like to catch. Jigs come in football, swimming, and flipping varieties, each suited for a different type of fish.